From Wikipedia, the free encyclopedia

Jump to navigationJump to search

The sun parakeet (Aratinga solstitialis), also known in aviculture as the sun conure, is a medium-sized, vibrantly colored parrot native to northeastern South America. The adult male and female are similar in appearance, with predominantly golden-yellow plumage and orange-flushed underparts and face. Sun parakeets are very social birds, typically living in flocks. They form monogamous pairs for reproduction, and nest in palm cavities in the tropics. Sun parakeets mainly feed on fruits, flowers, berries, blossoms, seeds, nuts, and insects. Conures are commonly bred and kept in aviculture and may live up to 30 years. This species is currently threatened by loss of habitat and trapping for plumage or the pet trade. Sun parakeets are now listed as endangered by the IUCN (International Union for Conservation of Nature).[1]

The sun parakeet was one of the many species originally described by Carl Linnaeus in his landmark 1758 10th edition of Systema Naturae.[2] As Linnaeus did with many of the parrots he described, he placed this species in the genus Psittacus, but it has since been moved to the widely accepted Aratinga, which contains a number of similar New World species, while Psittacus is now restricted to the type species, the grey parrot. The specific epithet solstitialis is derived from the Latin for ‘of the summer solstice’, hence ‘sunny’, and refers to its golden plumage.[3] The two widely used common names are “sun conure”, used in aviculture and by some authorities such as Thomas Arndt, and “sun parakeet” as used by the American Ornithologists’ Union and widely in official birdlists, field guides, and by birders.[4] However, this is the only species of “conure” that is regularly referred to as such in ornithological circles; most others are called “parakeets” by authorities. 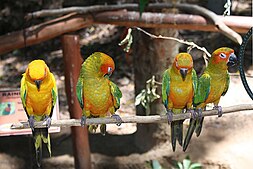 Adult on the left and three juveniles on the right

On average, sun parakeets weigh around 110 g (4 oz) and are around 30 cm (12 in) long.[6] The sexes are similar in plumage. Adults have a rich yellow crown, nape, mantle, lesser wing-coverts, tips of the greater wing-coverts, chest, and underwing-coverts. The face and belly are orange with red around the ears. The base of the greater wing-coverts, tertials, and base of the primaries are green, while the secondaries, tips of the primaries, and most of the primary coverts are dark blue. The tail is olive-green with a blue tip. From below, all the flight feathers are dark greyish. The bill is black. The legs and the bare eye-ring are grey, but the latter often fades to white in captivity (so using amount of grey or white in the eye-ring for determining “purity” of an individual can be misleading). It is easily confused with the closely related jandaya parakeet and sulphur-breasted parakeet, but the former has entirely green wing-coverts, mantle, and vent, while the latter has green mottling to the mantle and less orange to the underparts. The sun parakeet is also superficially similar to the pale-billed. Super Sun Conure is often also named by breeders as (Yellow-Factor Sun Conure) since there is also (Red-Factor Sun Conure).[7]

Juvenile sun parakeets display a predominantly green plumage and resemble similar-aged sulphur-breasted parakeets. The distinctive yellow, orange, and reddish colouration on the back, abdomen, and head is attained with maturity.

Sun conures live in a relatively small region of northeastern South America: the north Brazilian state of Roraima, southern Guyana, extreme southern Suriname, and southern French Guiana. They also occur as vagrants to coastal French Guiana. Their status in Venezuela is unclear, but recent sightings from the southeast near Santa Elena de Uairén have been reported. They may occur in Amapá or far northern Pará (regions where the avifauna generally is very poorly documented), but this remains to be confirmed. Populations found along the Amazon River in Brazil are now known to belong to the sulphur-breasted parakeet.[8]

Sun conures are mostly found in tropical habitats, but their exact ecological requirements remain relatively poorly known. They are widely reported as occurring within dry savanna woodlands and coastal forests, but recent sightings suggest they mainly occur at altitudes less than 1200 m, at the edge of humid forests growing in foothills in the Guiana Shield, and cross more open savannah habitats only when traveling between patches of forest. Sun conures have been seen in shrublands along the Amazon riverbank, as well as forested valleys and coastal, seasonally flooded forests. These conures usually inhabit fruiting trees and palm groves.[9] 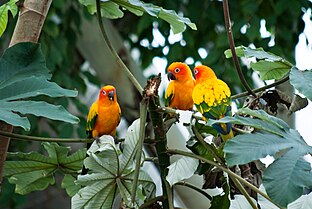 A group of sun parakeets

Like other members of the genus Aratinga, the sun parakeet is very social and typically occurs in large flocks of 15 to 30 individuals. They rarely leave the flock, but when they get separated from the group, they squawk and scream in a high-pitched voice which can carry for hundreds of yards, allowing individuals to communicate with their flock and return to them. Flocks are relatively quiet while feeding, but are known to be very vocal and make loud noises when in flight. They can travel many miles in a single day, and they are fast, direct flyers. Nonverbal communication is also practised, with a variety of physical displays. Birds within a flock rest, feed one another, preen, and bathe throughout the daylight hours. They move through the trees using their beaks for extra support. They also have the ability to use their feet like hands to help hold, examine, or eat items.[10] Sun conures have been reported to nest in palm cavities. When in molt, conures are uncomfortable, so are easily irritable. Bathing, warm rainfalls, and humidity allow the sheaths of each pin feather to open more easily and lessen their discomfort. Sun conures are extremely smart and curious, so require constant mental stimulation and social interaction. Their speech and ability to learn tricks in captivity are quite moderate. Otherwise, relatively little is known about their behavior in the wild, in part due to confusion with the sulphur-breasted parakeet species. Regardless, the behavior of the two is unlikely to differ to any great extent.[11] 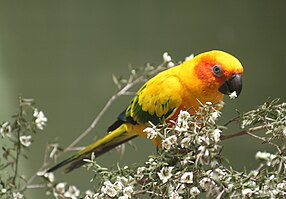 In the wild, sun conures mainly feed on fruits, flowers, berries, blossoms, seeds, nuts, and insects. They feed on both ripe and half-ripe seeds of both fruits and berries. They also consume red cactus fruit, Malpighia berries, and legume pods. At times, they forage from agricultural crops and may be considered pests. They require more protein intake during breeding season, more carbohydrates when rearing young, and more calcium during egg production. 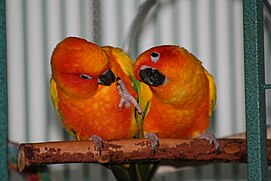 A pair of sun conures

Young sun conures form monagamous pairs around 4 to 5 months of age. Prior to breeding, they may be seen feeding and grooming one another. Mating can last up to three minutes, after which pairs become very affectionate with each other. Prior to egg laying, the female’s abdomen noticeably swells. They have been known to nest in trees or in cavities of Maurita flexuosa palms. Fertility rate of sun conures is relatively high. Typical clutch size is three or four white eggs, and they may be laid in two- to three-day intervals. Pairs may only destroy and eat their eggs in cases of calcium deficiency. Females are responsible for the entire incubation period from 23 to 27 days, and only leave the nest for short feeding periods. Males aggressively protect the nest from potential predators. Eggs may fail to hatch if they are not kept warm or if the bird fails to break through the shell successfully, which may take from a few hours to a few days. Chicks are born blind, naked and completely vulnerable. Only after 10 days, they begin to open their eyes and their feather quills break through. Both parents participate in feeding the chicks. The young depend on their parents for 7 to 8 weeks after hatching, and only become independent after 9 to 12 weeks. Conures are sexually mature around 2 years of age and have a lifespan ranging from 25 to 30 years.[11]